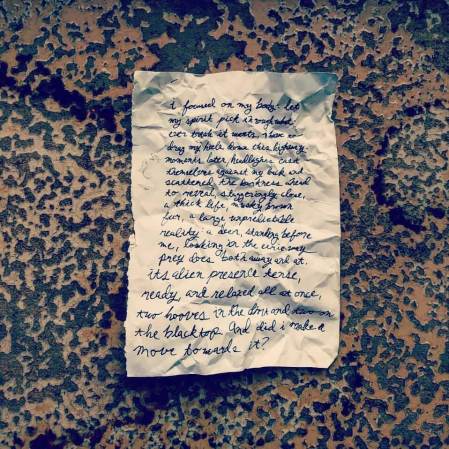 i focused on my body: let my spirit pick through whatever trash it wants, i have to drag my heels down this highway. moments later, headlights cast themselves against my back and scattered the darkness ahead to reveal, staggeringly close, a thick life, a musky brown fur, a large, unprecedented reality: a deer, standing before me, looking in the eerie way that prey does both away and at. its alien presence tense, ready, and relaxed all at once, two hooves in the dirt and two on the blacktop. And did I make a move towards it in the very moment that it lunged forward, leaping into the road?

fragments from an in-progress piece of short fiction about memory, deer, and crime. 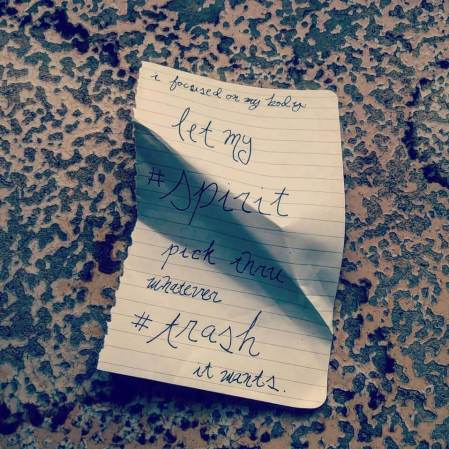 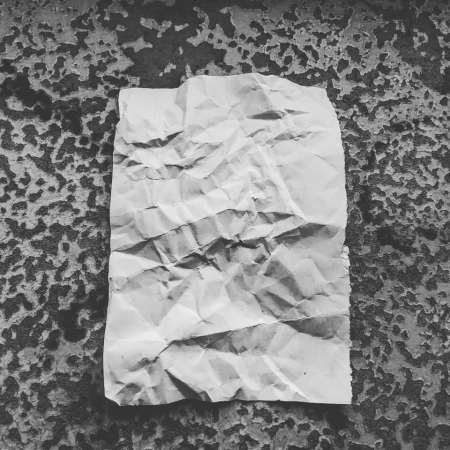 I’ve had a new piece, River Babble, published by 34th Parallel Magazine. It’s a dream about alligators, fate, and the corrosive effects of wind and rain. You can buy it at 34thparallel.net/. 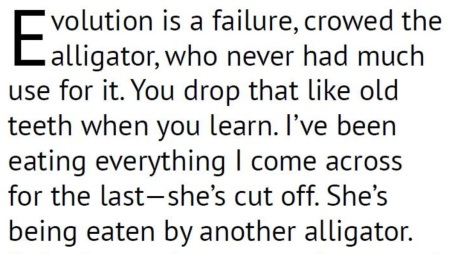 This is the first piece I’ve published in my recent spat of submissions. In fact, it’s my first piece of published non-journalism since Hideosity, which you shouldn’t read on an empty stomach.

Since writing this, I’ve made contact with folks in Providence who also are interested in super-ancient animals. Particularly, Eli Nixon is obsessed with horseshoe crabs, which are so old we use their immune systems to test vaccines. Just so I don’t leave you thinking alligators are so special . . .

A snippet from my bio in the mag:

I am a walker, like the people in the story. I walk everywhere, and in Philadelphia every street I turn on spools up a set of associations, memories, relationships: when these buildings were built, which other parts of the city they resemble, what I have done, said, seen, and felt there, what other streets branch off and how I feel about them, which turns I usually take and which I don’t like to take and which I will today. I moved to Providence and in comparison Providence presents a vacuum into which anxiety and fear flow. The fear is artificial, but the rootless emptiness isn’t. [. . .] Writing can alienate and de-familiarize, but it can also be an act of familiarization, of naming and staking out and layering associations.

This is what I was thinking about. 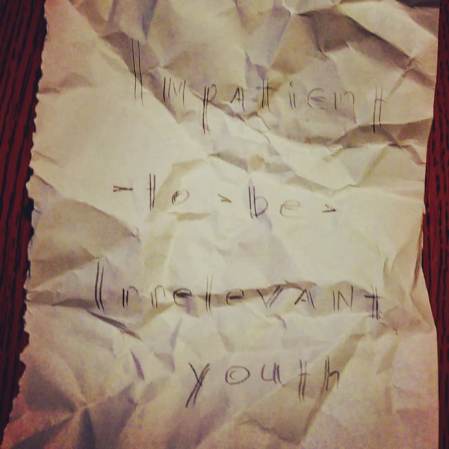 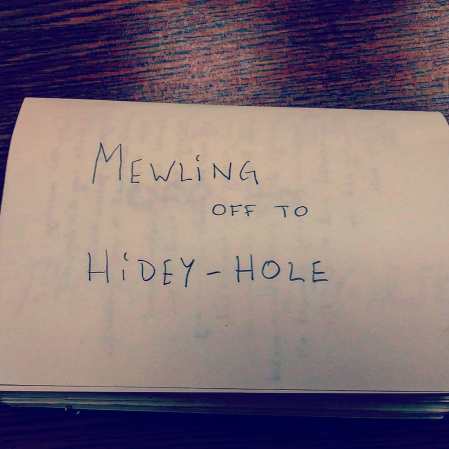 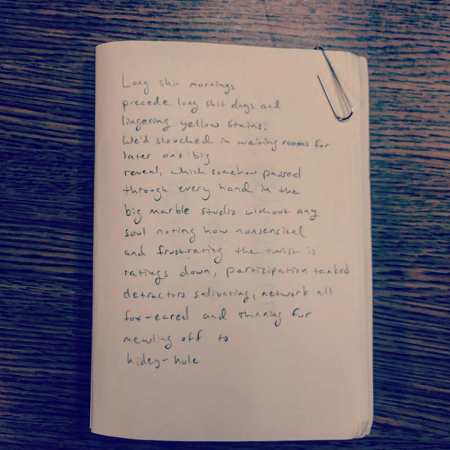 Long shit mornings
precede long shit days and
lingering yellow stains.
We’d slouched in waiting rooms for
later on’s big
reveal, which somehow passed
through every hand in the
big marble studio without any
soul noting how nonsensical
and frustrating the twist is
ratings down, participation tanked
detractors salivating, network all
fox-eared and thinning fur
mewling off to
hidey-hole 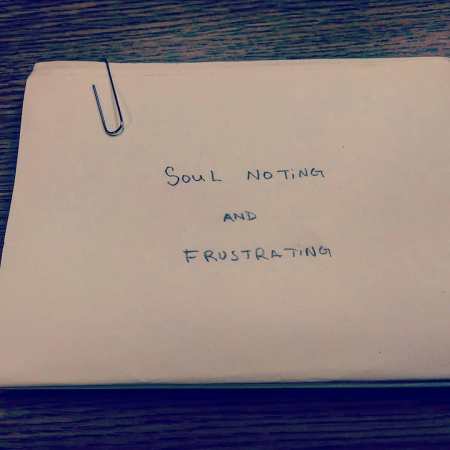 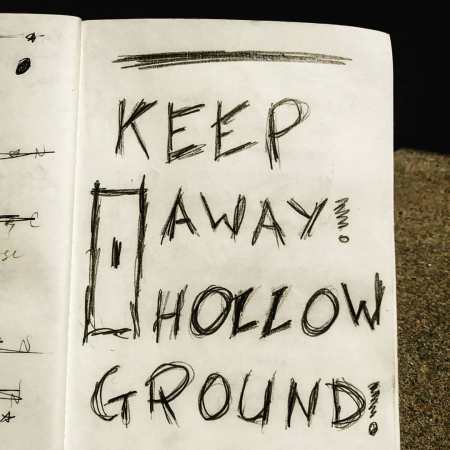 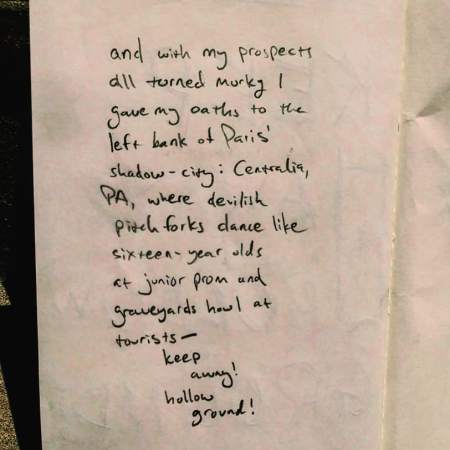 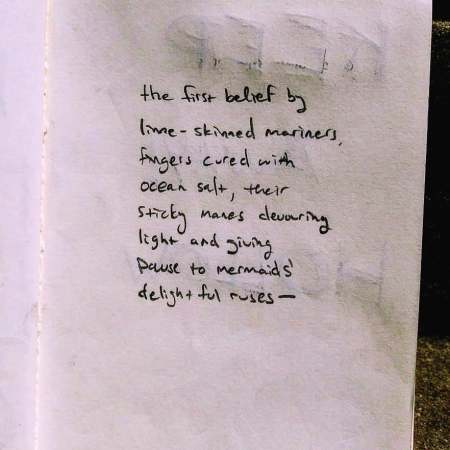 And with my prospects
all turned murky I
gave my oaths to the
left bank of Paris’
shadow-city, Centralia,
PA, where devils’
pitchforks dance like
sixteen-year-olds
at junior prom and
graveyards howl at
tourists–
______keep
_________away!
______hollow
_________ground! 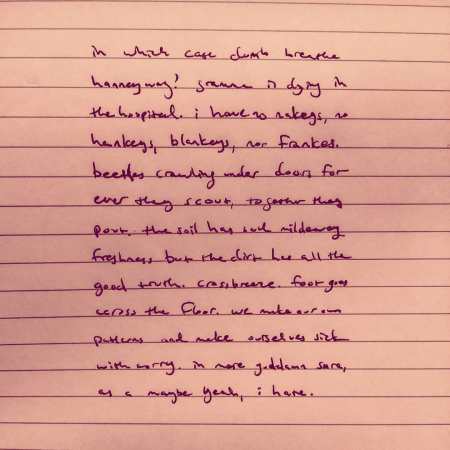 in which case dumb breathe
hanneyway? gramma is dying in
the hospital. i have to nakeys, no
hankeys, blankeys, nor frankes.
beetles crawling under doors for
ever they scout, together they
pout. the soil has such mildewey
freshness but the dirt has all the
good truth. crossbreeze. foot goes
across the floor. we make our own
patterns and make ourselves sick
with worry. in more goddamn sure,
as a maybe yeah, i hate. 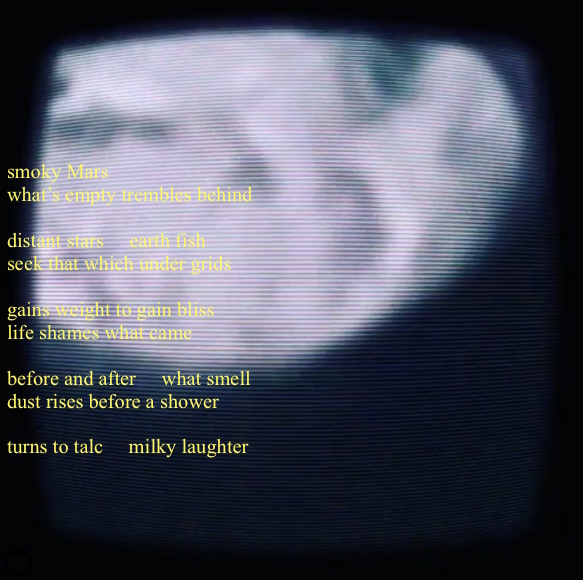 Multimedia artist John Bezark and I started a collaboration to bridge the gap between his home in Philly and my new home in Providence. I send him poetry, he sends me a video back, and then I send poetry back . . . etc. This is the third item, a response to his video of earlier this week. The whole collab is playing out between us on insta, but I’ll try to share here as much as possible.

distant stars     earth fish
seek that which under grids

before and after     what smell
dust rises before a shower

A collaboration with John Bezark. 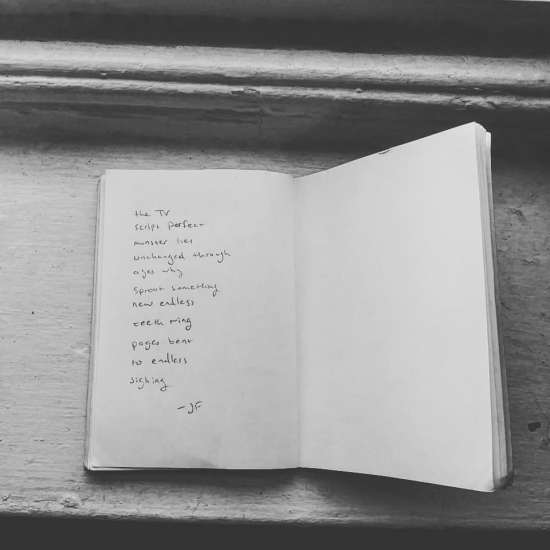 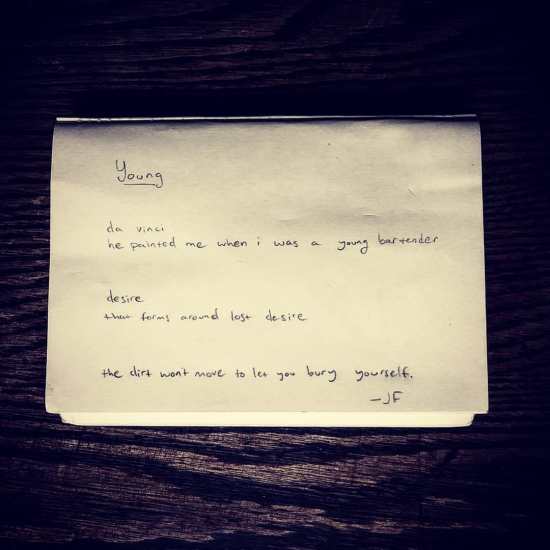 da vinci
he painted me when i was a young bartender

desire
that forms around lost desire

the dirt won’t move to let you bury yourself.